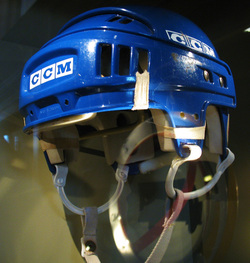 The Mariners were formed when some parents from the junior section of North Ayrshire IHC decided the kids shouldn’t get all the fun. Parents approached the clubs parent rep Eric Young and the puck droped there. Ice time was secured and from then on parents and friends were keen to come along and give hockey a go.

Word started to get around and before long the phones were ringing with old and new recruits willing to have a shot at the “Big show”.  Mariners applied and were accepted for affiliation to the SRIHC and players registered to complete the formalities.

Over the years the Mariners have grown in strength and stature, we made our first appearance at the Scottish Plate, which is a Scottish run tournament in 2011. This was a huge success for a club like The Mariners.
2013 was a particularly highlight season, the club is now attracting quality players as well as new starters and as a club we are always open to new starters to hockey. We now boast enough members to run seperate A and B teams where both teams are competitive.
2013 has seen the A team finish 3rd in both the Scottish Plate and the Blackhawks tournament while the B team played their first tournament hockey and finished 4th in the Aberdeen tournament.

The Mariners were finally successful in winning the Mariners trophy in 2014 with a 4-1 victory over the Glasgow Mustangs. 2014-15 was a trophyless season but the Mariners have begun 2015-16 season in style by winning the Stirling Wolves tournament, winning all 5 games without conceding a goal while scoring 28!

2016-17 season was a successful season for the Mariners as a club. The Mariners C team recorded their first win, beating the Lowland Raiders. The C team are progressing well as a team, this season has really shown that the players have the ability and the mindset to become good hockey players.

The Mariners B team had a fantastic season, appearing in two tournament finals. A loss to the Piranhas in the Scottish Bowl competition mean that they have been promoted to the Scottish Quaich for season 2018. Another final appearance in the Piranhas tournament ended in a penalty shot loss to the Caledonia Hellcats. Although trophyless it was a successful season as a team. The B team are now regularly competing against teams at the Bowl/Quaich level.

The Mariners A team had a mixed season. Their performance at the Scottish Plate was below par, scoring only 3 goals and drawing 2 matches. Those 2 draws were enough to keep the team in the Plate competition, which is always the primary target. Another final appearance in the Mariners tournament (that's 5 out of 6) came down to a penalty shoot-out, unfortunately the Mariners were to taste defeat yet again.

2017-18 season sees a number of players move up through the teams so each one of them will be looking to quickly establish themselves in their respective teams. Here is hoping the 10th anniversary season will be a trophy laden one!


The Mariners A/B train on Tuesday evenings at the Auchenharvie Ice Rink in Stevenson. The C team train out of Ayr ice rink on a Monday evening, we travel well, so if you want to invite us to your rink please contact our Fixtures secretary

Any excuse for a game and beer and the Mariners will be there!
COMMON QUESTIONS ABOUT THE GAME OF HOCKEY

What is the puck made of?
The puck is made of vulcanized rubber and is three inches in diameter and one inch thick, weighing about six ounces. It is frozen before entering play to make it bounce resistant.

How fast does the puck travel?
Some of the game's hardest shooters send the puck toward the net at speeds between 90 and 100 mph with the elite shooters easily topping the century mark. Making things even more difficult on the goalie is the puck will frequently curve in flight, much like a baseball.

Which shot is the hardest for a goalie to stop?
Generally speaking, it is one that's low and to the stick side. Some goaltenders overplay to the stick side, presenting a more inviting target on the glove side.

What about deflections?
Deflections aren't just luck. Players practice redirecting shots by standing at the side of the net and knocking a shot from the outside past the goalie into another area of the goal.

How thick is the ice?
The ice is approximately 3/4" thick and is usually kept at 16 degrees for the proper hardness. The thicker the sheet of ice becomes, the softer and slower it is.

What are the standard dimensions of the rink?
The standard is 200' by 85', although some do vary.

Can the puck be kicked in for a goal?
Not intentionally. However, if a puck is deflected off a skate or off a player's body and no overt attempt is made to to throw it or kick it in, a goal is allowed.

Why do goalies frequently come out of in front of their net?
Usually when a goalie leaves the area immediately in front of the goal it is to reduce the shooting area, cut down the angle of the shooter or for the offensive player to release his shot before he would like to. After coming out of the net, the goalie is usually backing up slowly in an attempt to get the shooter to commit himself first.

Who gets credited for an assist?
The last player or players (no more than two) who touch the puck prior to the goal scorer are awarded assists. For example, if player A passes to player B who passes to player C who scores a goal; players A and B get assists.

Why doesn't the referee stop fights?
There are several. First, it is his job to watch what is going on and determine who should be penalized. Also, it is quite hazardous in close during a fight and since he is in sole control of the game, he has to protect himself from injury.

How are the markings - the red and blue lines, goal lines, crease and face-off circles - applied to the ice?
The ice is built up to a half-inch thickness by spraying water over the concrete floor, which has the freezing pipes embedded into it. Then the markings are painted on, after which additional water is sprayed to coat the markings and build the ice to the prescribed thickness.

What are hockey sticks made of?
Hockey sticks are made of wood, generally northern white ash or rock elm, or aluminum. The handle is one piece and the laminated wooden blade is affixed to it.

Are all sticks alike?
Far from it. Just as baseball players have individually personalized bats, so too do hockey players have their own patterned sticks. Flexibility, the angle of the blade, weight, etc., vary from player to player.
HOCKEY TALK For fans new to the game, hockey has a language all its own.
The following guide should be helpful in picking up hockey's lingo.

Back Check: To hinder an opponent heading toward and into the defending zone.

Blue Lines: The pair of one-foot wide blue lines which extend across the ice at a distance of 60 feet from each goal. These lines break up the ice into attacking, neutral and defending zones.

Body Check: Use of the body on an opponent. It is legal when the opponent has possession of the puck or was the last player to have touched it.

Butt-ending: To hit an opponent with the end of the stick farthest from the blade. It is illegal and calls for a penalty.

Goal Crease: Area directly in front of the goaltender. It is four feet wide and eight feet long and marked off by red lines. Offensive players who do not have possession of the puck may not enter.

Deke: To fake an opponent out of position.

Face Off: The dropping of the puck between one player from each team to begin or resume play.

Forecheck: To check an opponent in his end of the rink, preventing an offensive rush.

Freezing the Puck: To hold the puck against the boards with either the skate or stick to get a stoppage of play.

Goal Line: The red line which runs between the goal posts and extends in both directions to the side boards.

Goal Mouth: The area just in front of the goal and crease lines.

Hat Trick: The scoring of three or more goals by a player in one game.

One-timer: Hitting the puck directly upon receiving a pass. The offensive player takes his backswing while the puck is on its way
to him and tries to time his swing with the arrival of the puck.

Penalty Box: The area opposite the team benches where penalized players serve time.

Power Play: A power play occurs when a team has a one-man or two-man advantage because of an opponent's penalties.

Pulling the Goalie: Replacing the goalie with an extra skater in a high-risk attempt to tie the game. This primarily occurs when a team trails, usually by one goal, late in the game.

Save: A shot blocked by the goaltender, which would have bean a goal had it not been stopped.

Screened Shot: The goaltender's view is blocked by players between he and the shooter.

Slap Shot: Hitting the puck with the blade of the stick after taking a full backswing.

Slot: The area immediately in front of the goal crease. It is from this zone that most goals are scored and where the most furious activity takes place.

Splitting the Defense: The player with the puck attempts to squeeze between the opponent's defensemen.

Stick Handling: To control the puck along the ice with the stick.

Top Shelf: Term used to describe when an offensive player shoots high in an attempt to beat the goalie by shooting the puck into the top portion of the net.

Wraparound: A player skates around behind the opposing goal and attempts to wrap the puck around the goal post and under the goalie.

Wrist Shot: Hitting the puck with the blade of the stick using a quick snap of the wrist rather than a full back swing.